They say people like this become shrinks just so they can be more effective tacticians and manipulators. And who writes a letter and sits on it for 7 days? hmm.. Or better yet I should ask. Who backdates a letter such as the one that was written to me on the 26th?

Karen now says that Treatment Staff indicated to her that my mother verbally rescinded the power of attorney... I have to be served and she has to be of sound mind to recind it.

It states clearly that it shall not be terminated by her incapacity or if she's found mentally ill.

So is my mom mentally capable of making any decisions? Is she capable to stand trial now and know right from wrong? 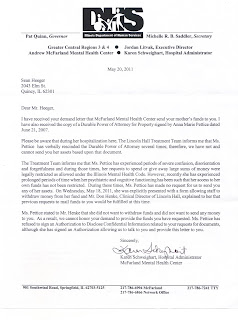 Is there an independent trusted third party standing among my mom, I and the hospital doctors that I trust? NO! The truth is that the PoA can't be rescinded in any way. Additionally, they were the ones that already established my mothers mental instability.